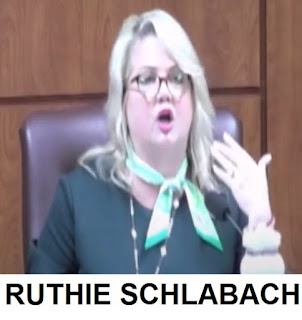 By John Labriola - Barely a week into her term as chair of the Citrus County Commission, the famously thin-skinned Ruthie Schlabach is pushing to limit public participation at commission meetings. Schlabach, who was selected by her colleagues as board chair last week,  is sponsoring an item at this Tuesday's commission meeting to eliminate the time-honored tradition of allowing the public to speak about any topic at the beginning of each commission meeting following the pledge of allegiance and the approval of the board's consent agenda.  In a poorly worded memo included in Tuesday's agenda package, Schlabach claims her proposal would "ensure we are conducting our meetings the most efficient and transparent manner as is possible."  If Schlabach's proposal is adopted, residents will have to wait until the end of a commission meeting to address the board on any non-agenda item, forcing them to sit through hours of commission discussion on items totally unrelate
Post a Comment
Read more 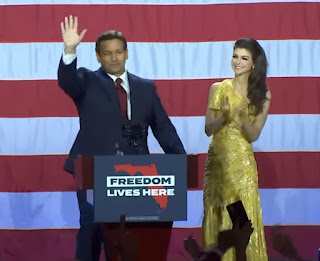 By John Labriola - Florida had a great night last Tuesday, as Election Night brought landslide victories for Gov. Ron DeSantis and conservatives across the board. Republicans not only swept all the statewide races but also secured unprecedented supermajorities in the Legislature, serving as a massive vote of confidence for the governor's bold brand of conservatism.  Our state also showed the world how elections should be run, with no irregularities reported and all results tabulated within a short time of polls closing, eliminating the possibility of massive fraud. By contrast, Democrat-run states and counties across much of the country were suspiciously plagued with voting equipment failures, mishandling of ballots, and incredibly long vote-counting delays that still have America wondering which party will end up in control of Congress.  As for our local elections, I want to thank all my supporters and everyone who volunteered or donated to my campaign for Inverness City Council
Post a Comment
Read more

By John Labriola - Voters face an important choice at the polls this Tuesday at all levels of government. Whether it's putting a congressional check on the Biden administration's open borders woke socialism, keeping Florida free under DeSantis, or preserving our community's small town conservative Christian character by electing John Labriola to Inverness City Council, a lot is at stake this Nov. 8.  I am the only candidate for city council who has pledged to oppose overdevelopment and to stop using our local tax dollars to promote leftist agendas such as "LGBT Pride Month" celebrations in our public libraries. We don't need more traffic and crime coming to our area, and we certainly don't need rainbow-flag-draped sexual orientation displays and drag queens overrunning our community. These things undermine our values and quality of life; they do not make us stronger.  My positions have earned me the hatred of the Citrus County Chronicle and some of their
Post a Comment
Read more

Let's preserve what we have

By John Labriola - Over the last two months of campaigning for city council, I've had the opportunity to meet many of the folks who make up the heart and soul of this community. From seniors on fixed incomes to small business owners to working families doing what they need to make a living, I've met folks from all walks of life who embody the traditional values of God, Family and Country that made America great.  Their concerns include everyday bread-and-butter issues like gas and food prices, taxes, and the ever-increasing traffic on our roads. But as traditional Christian conservatives, they care most deeply about the state of our society as a whole and the unmistakable sense that their values are under assault. They are tired of being called bigots, homophobes and racists because they believe in God, oppose the LGBT grooming agenda, and don't support the radical goals of the BLM, CRT and "Defund the Police" movements. And they want their local elected officials
Post a Comment
Read more

Get Out the Vote Sign Waving Rally this Friday! 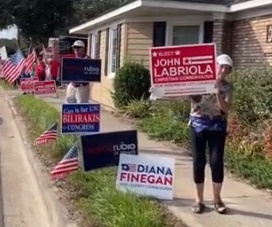 Come to the big "Get out the Vote" Rally this Friday, Nov. 4 from 5 to 6:30 on Main Street in front of the Old Courthouse in downtown Inverness at 1 Courthouse Square.  We will be waving signs and flags for our conservative candidates, including Gov. Ron DeSantis, Florida Attorney Gen. Ashley Moody and John Labriola for City Council! Bring your own sign or borrow one at the rally!
Post a Comment
Read more 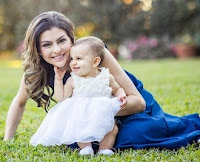 The "Stand with DeSantis" Tour is coming to Citrus County this weekend. First Lady Casey DeSantis will speak at the College of Central Florida, 3800 S Lecanto Hwy, on Saturday, Nov. 5 at 5 p.m. She will be joined by Florida Attorney Gen. Ashley Moody. Doors open at 3 p.m., and seating is extremely limited. Click the Eventbrite link HERE to secure your spot.
Post a Comment
Read more

Stick it to the liberal elites 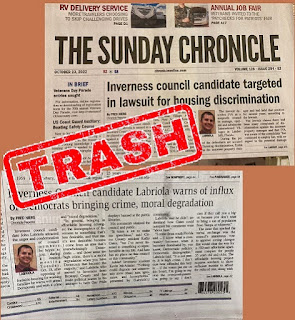 By John Labriola - You know Citrus County's liberal elites are terrified of you when the Citrus County Chronicle runs two front-page hit pieces on you in the space of just four days. I earned that distinction this past week, when the Chronicle decided to cast me as a scary bigot because I'm against overdevelopment. On Thursday, the Chronicle attacked me over my comments at last week's Inverness City Council meeting, when I dared to criticize the council for their repeated approval of zoning and land use changes to allow the construction of high-density residential projects such as the new Colonnade Park apartment complex. I told council members that their push for more and more overdevelopment threatens to destroy our community's small-town conservative Christian character and turn us into just another overcrowded, high-crime liberal metropolis like Tampa. The liberal-dominated council  – which is understandably out of touch with the voters since the city has not held a
Post a Comment
Read more
More posts